In a soporific but precedential decision, the Board affirmed two of three refusals of the proposed mark THERMAL MATRIX for a "Heat responsive and malleable liner that is an integral component of an oral dental appliance used in the mouth and worn over the teeth of an individual while sleeping to reduce the effects of snoring and sleep apnea" [THERMAL disclaimed]. The Board found the mark to be merely descriptive of the goods, and further found that the specimen of use (immediately below) does not show the mark in use in connection with applicant's liners. However, the Board overturned the third refusal, concluding that the mark as depicted in the application drawing (i.e., THERMAL MATRIX) is a substantially exact representation of the mark as actually used. In re James S. Fallon, Serial No. 86882668 (October 21, 2020) [precedential] (Opinion by Judge Christopher Larkin). 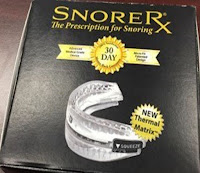 
Where, as here, an applicant seeks registration for a component of a product rather than for the product itself, it is particularly important that the specimen contain some visual or verbal identification of the component to create the required direct association between the mark and the identified goods. See Minerva Assocs., 125 USPQ2d at 1638-39. * * * The specimen that Applicant submitted does not sufficiently identify any specific component, much less the component for which registration is sought, visually or verbally, to create the required direct association between the proposed mark and that component.

And so the Board affirmed this refusal.

Mere Descriptiveness: Applicant Fallon argued that the Examining attorney "focused entirely on the meanings of the individual words 'thermal' and 'matrix' while overlooking the significance of the mark THERMAL MATRIX taken as a whole."

The Board found that each word in the mark is "highly descriptive" of the goods. "As shown in the webpages above, Applicant's 'heat responsive and malleable liner' embodies 'a pattern of lines and spaces' through which the user can personalize the fit of the oral appliance through the application of heat."

The Board then considered whether the combination of the two words yields "something more than merely the sum of its descriptive parts." It pointed out that Fallon website "touts the product's 'Thermal Matrix Design,' which 'features a thermal matrix material that enables each user to personalize their device with a custom impression' through 'a simple step by step process that can be done in the comfort of your home.'"

Third-party webpages confirmed that "when Applicant's goods are advertised and promoted by others, the same descriptive message of the proposed mark would be understood by consumers." Finally, Fallon argued (as usual) that some imagination, thought, or perception would be required before a consumer would glean any information about the product from the mark, and therefore the mark is merely suggestive. Although Fallon correctly stated the law, the facts did not cooperate.


Applicant's own promotional materials and the third-party webpages shown and discussed above make it clear that "a consumer would immediately understand the intended meaning of" the proposed THERMAL MATRIX mark as a descriptor of a key product feature, N.C. Lottery, 123 USPQ2d at 1710, and eliminate the need for any "imagination, thought or perception" to determine the term's significance.

Concluding that Fallon failed to rebut the USPTO's prima facie showing, the Board affirmed the Section 2(e)(1) refusal.

Mutilation? The Examining Attorney contended that the specimen of use displays the mark as NEW THERMAL MATRIX, whereas the application drawing displays the mark as THERMAL MATRIX, since "NEW" is not a generic word but merely descriptive. Applicant Fallon asserted that consumers would not see "NEW" as part of the mark because "the letter size and style of the word 'NEW' are visually distinguishable from those of the words 'Thermal Matrix' which are located separately on the package." 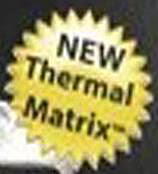 
The word NEW appears in all capital letters on the specimen above the words "Thermal Matrix," which are depicted in initial capital letters and are followed by the T symbol. Given the descriptive, non-source identifying nature of the word NEW acknowledged by the Examining Attorney and Applicant, and the fact that the words "Thermal Matrix" are set apart visually from the word NEW, we find that the drawing of the mark as THERMAL MATRIX is 'a substantially exact representation of the mark as used with the goods"" Trademark Rule 2.51(b), and we reverse the refusal to register based on that rule.