The Ministry of Commerce of Myanmar issued Order 63/2020 on 28 August 2020 announcing that the new Myanmar Office of Intellectual Property (“OIP”) is ready to start operations on 1 October 2020 through a “Soft Opening” period, which is anticipated to last for at least 6 months until the “Grand Opening”. The OIP will implement the new Myanmar Trade Marks Law enacted in January 2019, which has provisions for formality examination, substantive examination, publication, registration, opposition, etc., and is closer to international trade mark practices.

During this period, the OIP will only accept trade mark applications from applicants wishing to regularise their existing rights, i.e. applicants who previously recorded a Declaration of Ownership of a Trade Mark with the Office of Registration of Deeds (“ORD”) or applicants who have not previously recorded such declaration but have nevertheless been genuinely using the trade mark in Myanmar (or possibly overseas – see table below).

Besides the usual filing information on the mark, applicant and goods and services, the documents required to file a trade mark application are: 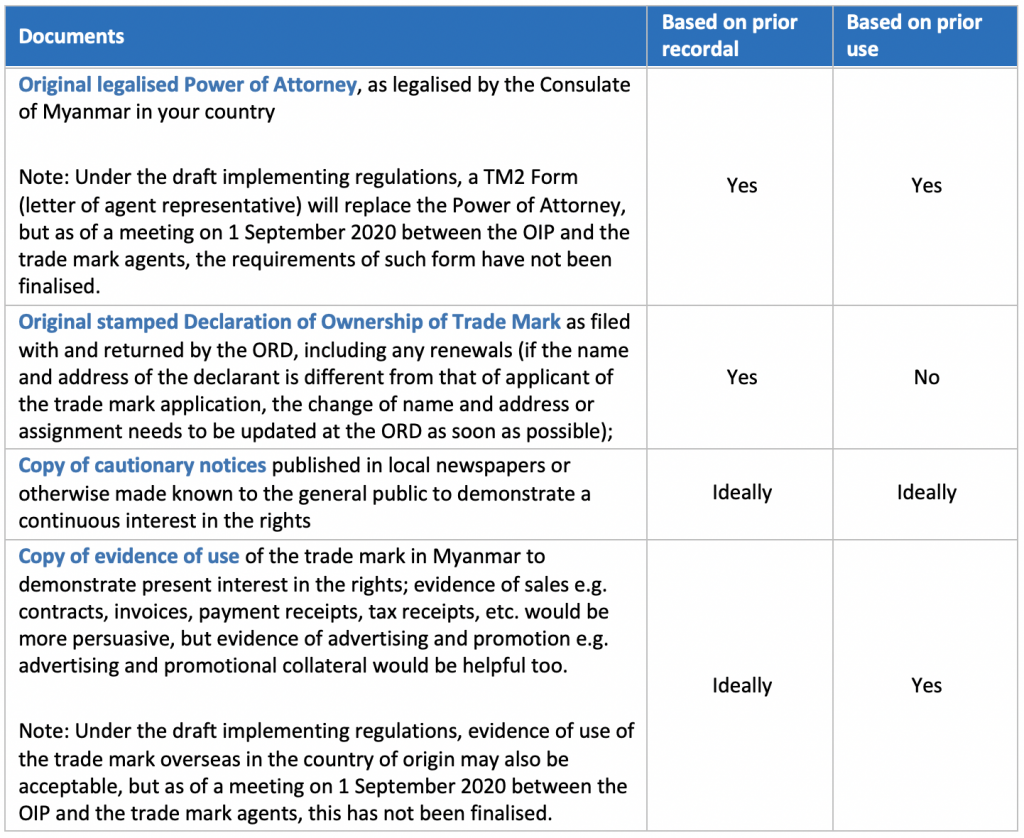 *The Order mentions that the applications will be filed via electronic means, therefore it is unclear if the requirement of original documentation would be waived, or that these should be submitted separately as supporting documents after the applications have been filed electronically.

Grand Opening (anticipated to be after 1 April 2021, subject to further announcements)

At the end of the “Soft Opening” period, the OIP will start accepting trade mark applications from all other interested parties.

Under the new trade mark application procedure, trade mark searches would be available, the opposition period is 2 months from the date of publication, oppositions would be available at the IP Court, the term of registration will be 10 years from the date of application, and renewal requests can be filed 6 months prior to the expiry of the registration.

Whilst the ORD will continue to accept recordals of a Declaration of Ownership of a Trade Mark until the Grand Opening, after the Grand Opening, trade mark applications will be granted on a first-to-file basis, and existing rights obtained through recordation with the ORD and publication of cautionary notices will no longer suffice to demonstrate ownership of a trade mark in Myanmar.

Presently, the new law is still silent on the applicable official fees at each stage of the proceedings and this is anticipated to be announced just prior to the Grand Opening.

ARTICLE TAGS
Myanmar Intellectual Property Trademark
POPULAR ARTICLES ON: Intellectual Property from Myanmar
Patent Law in India
Anand & Anand
The Patents Act 1970, along with the Patents Rules 1972, came into force on 20th April 1972, replacing the Indian Patents and Designs Act 1911. The Patents Act was largely based on the recommendations of the Ayyangar Committee Report headed by Justice N. Rajagopala Ayyangar. One of the recommendations was the allowance of only process patents with regard to inventions relating to drugs, medicines, food and chemicals.
Patents Law In India - Everything You Must Know
Vaish Associates Advocates
The presentPatents Act, 1970 came into force in the year 1972, amending and consolidating the existing law relating to Patents in India
Concept Of Fair Use And Fair Dealing In Copyright
Singh & Associates
Fair use supports "socially laudable purposes," typically, if not exclusively, involving the use of the copyrighted work by a second author
Process: Trademark Registration In India
Intepat IP Services Pvt Ltd
Many entrepreneurs do not comprehend the importance of a TM search.
All You Need To Know About "Well-Known Trademarks"
Khurana and Khurana
With coming up of the new Trade Mark Rules 2017, a new procedure has been created that allows the Registrar to proclaim a particular trademark as "well known".
Assignment And Licensing Of Copyright
Singh & Associates
Copyright is a protection given to the creators of certain types of works as an acknowledgment to their intellectual input
FREE News Alerts
Sign Up for our free News Alerts - All the latest articles on your chosen topics condensed into a free bi-weekly email.
Register For News Alerts
Article Tags
Myanmar Intellectual Property Trademark
Related Articles
Trademark Filing Changes And Challenges Tilleke & Gibbins
A Closer Look At Series Marks Under Myanmar's New Trademark Law Tilleke & Gibbins
October 1, 2020, "Soft Launch" For Trademark Applications Fross Zelnick Lehrman & Zissu, PC
New trade mark registration system in Myanmar: Soft opening period to commence on 1 October 2020 Spruson & Ferguson
New Myanmar trade mark registration system: Soft opening period to commence on 1 October, 2020 Spruson & Ferguson
Mondaq Webinars
Visas, Work Visas/ Residence Permits and Nigeria's New Visa Policy
Famsville Solicitors
Webinar Lagos Nigeria
Competition Law Compliance Programs and Trainings: Client Experiences and Notes for the Future
ELIG Gürkaynak Attorneys-at-Law
Webinar Istanbul Turkey
More Webinars
Mondaq Advice Centres
Global
Trademarks in SAARC Countries
Global
Investment Immigration
More MACs
Upcoming Events
Mondaq Social Media