Australia: Models allegedly tied up and sexually assaulted – The law, defences and penalties for aggravated sexual assault in NSW

by Avinash Singh
Astor Legal
Your LinkedIn Connections
with the authors

A Sydney photographer charged with aggravated sexual assault has been granted bail after spending a month in custody.

48-year-old Garth Knight was arrested and bail refused on 25 September 2020 based on allegations that he sexually assaulted two models after they were tied up.

The incidents are said to have occurred in 2005 and 2011 according to the Police facts.

He initially made a bail application which was refused. However, a second release application was successful.

Police said that they commenced the investigation into sexual assault allegations against Knight in May 2020.

Strike Force Nannawilli was launched when the first allegation was made by a female model who worked with Knight at a warehouse in Surry Hills. She was 35 years old at the time of the incident in 2005.

Then, a second report was made by another model who worked with Knight at a home in Waterloo in 2011. She was 33 years old when the photoshoot took place.

The Police facts alleged that they had obtained messages in which Knight apologised to one of the complainants. It is unclear whether this 'apology' actually related to an allegation of sexual assault or whether it was was in relation to his conduct generally.

Both complainants were tied up at the time of the alleged sexual assaults and unable to escape. However, this would not appear to be incriminating given the nature of the photographs Knight is known to take.

Police executed a search warrant at a Redfern house immediately before arresting Knight. They seized hard drives, computers, camera equipment, and phones which are expected to be forensically examined.

Detective Chief Inspector Rod Hart said, "We've had four detectives working around the clock on this matter and it is a serious matter. No one deserves to be a victim of sexual assault."

As part of Knight's bail conditions he is not allowed to take pictures of any woman - in any context.

He is also banned from participating in any activity that involves photographing nude persons or any woman, regardless whether that be for work or leisure.

He is also not allowed to be present for any activity where a photo is taken of a woman or naked person.

There was also security in the sum of $480,000 provided to the Court before he was released. Should he breach his bail conditions, this amount of money will be forfeited to the Court.

His criminal lawyers for the bail application suggested that he report daily to Redfern police station. This was accepted by Magistrate Kate Thompson.

Finally, he cannot contact any woman who has modelled for him, with the exception of his partner.

This may create some difficulties for his defence.

Given the significant length of time between each alleged offence and the number of models Knight would have worked with during the intervening periods, one would expect that his defence may be bolstered by character witnesses.

For example, if models who he had worked with Knight before and after the incidents gave evidence that he was always mindful of consent, this would aid his defence.

He would be able to rely on the concept of 'good character' whereby a jury could assume that, due to his good character, Knight was:

This is likely to be significant as Knight denies the allegations, and through his criminal lawyer for aggravated sexual assault charges told the Court he believed he had consent.

Given the historical nature of the charges, Knight has also avoided being charged with sexual touching, as this offence had not been enacted in either 2005 or 2011.

Mr Knight was charged with sexual intercourse without consent and aggravated sexual assault in relation to an incident at a Surry Hills warehouse in 2005 and a Waterloo home in 2011.

The relevant legislation is Section 61J of the Crimes Act 1900 (NSW) for aggravated sexual assault.

In order to prove the charge, the police must establish beyond reasonable doubt:

With respect to the charge against Mr Knight, the circumstance of aggravation was 'deprivation of liberty'. This means that he did not let the complainant leave (ie. they were tied up).

The allegations were both said to occur during photoshoots and both alleged victims were models Knight was working with.

Despite the charges being 'historical sexual assaults', the delay in the complaints may not assist Knight.

This is because Section 294 of the Criminal Procedure Act 1986 provides that there may be good reasons why a complainant in a sexual assault proceeding did not come forward immediately.

If he is found guilty he will likely face a significant jail term.

The maximum penalty for aggravated sexual assault is 20 years imprisonment.

There is also a Standard Non-Parole Period (ie. the amount of time the offender must spend in jail before he can be released on parole) of 10 years imprisonment.

Despite these harsh maximum penalties, there have been recent cases where offenders have received penalties of just a few years imprisonment. Most notably, a doctor was recently sentenced to just 4 years imprisonment for sexual intercourse without consent and indecent assault.

Statistics for aggravated sexual assault offences in recent years have shown an increase in the number of offenders who are sentenced to jail. However, the length of imprisonment varies considerably.

His Instagram page has over 16,000 followers. It depicts photographs he has taken in the past showing naked male and female models using ropes and other materials. 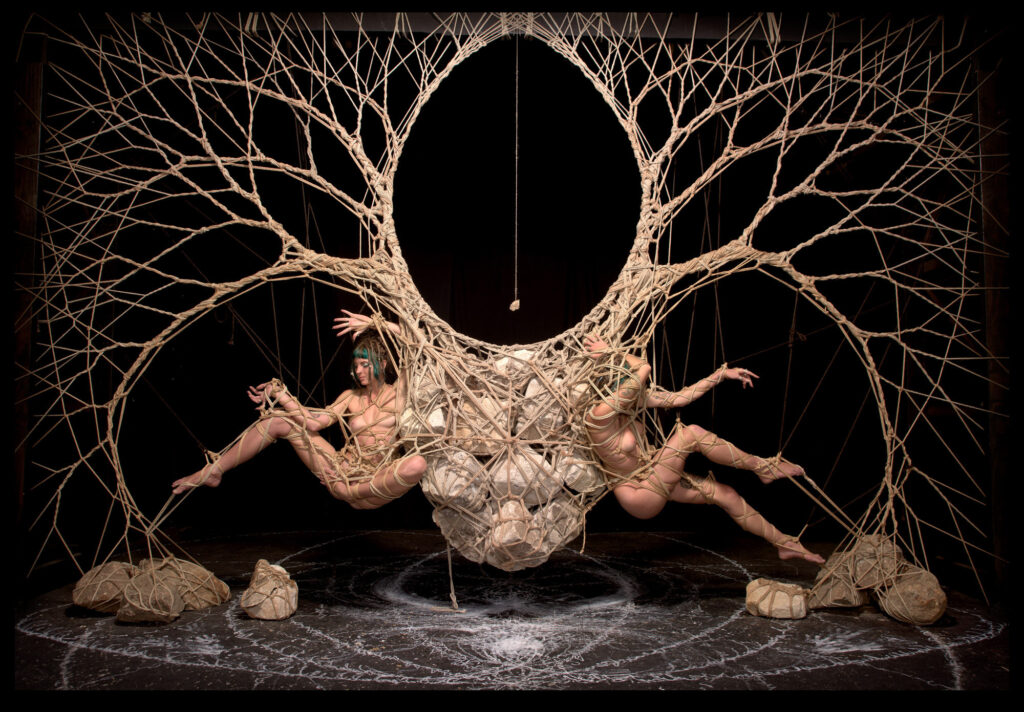 An example of Garth Knight's work

During an interview in March 2020, Knight was asked about how he built trust and connection with the models he used. He stated, "One of the most important aspects of the work is the connection and trust.Trust comes with honest discussion, being open and allowing yourself to be vulnerable."

And speaking on consent directly, the artist said, "Peoples limits and levels of consent are always discussed beforehand. I always check in with them during the process, and we have signals and methods for communicating that things are ok."

However, he acknowledged that the nature of the photographs he took was a "risky endeavour".

Knight told the interviewer that, "One of the most interesting and exciting things about these performances, and bondage play in general, is the power exchange and the giving and receiving of responsibility for someone. It is understood however, beyond question, that this is done with consent and this control at anytime may be returned."

He has been featured on well-known websites such as 'Time Out Sydney' where his works were recommended to the public.

Aggravated Sexual Assault charges are extremely serious. The stigma that comes with them is likely to follow a person for the rest of their life. That is why it is important to obtain advice from one of Australia's best sexual assault lawyers who has successfully defended hundreds of these charges. See our recent results for sexual assault.